[GUIDE] Detailed Guide on how to Setup OBS to Stream

[GUIDE] Detailed Guide on how to Setup OBS to Stream

Seeing as the instructions in the main WRTL Twitch Channel Master Thread aren't as detailed as possible / as I would like to see (the video linked in the megathread is decent at showing you what to setup but doesn't go into explaining why some things need to be the way they are, also some people rather read then watch when being shown how to do something) I decided to help out and make an in depth guide.

I will be going over every part of the settings for OBS that you will need to setup (a few pages I won't even cover due to them being personal preference on how you have them set up) in here so that you can try to get the best quality out of your stream for the viewers. 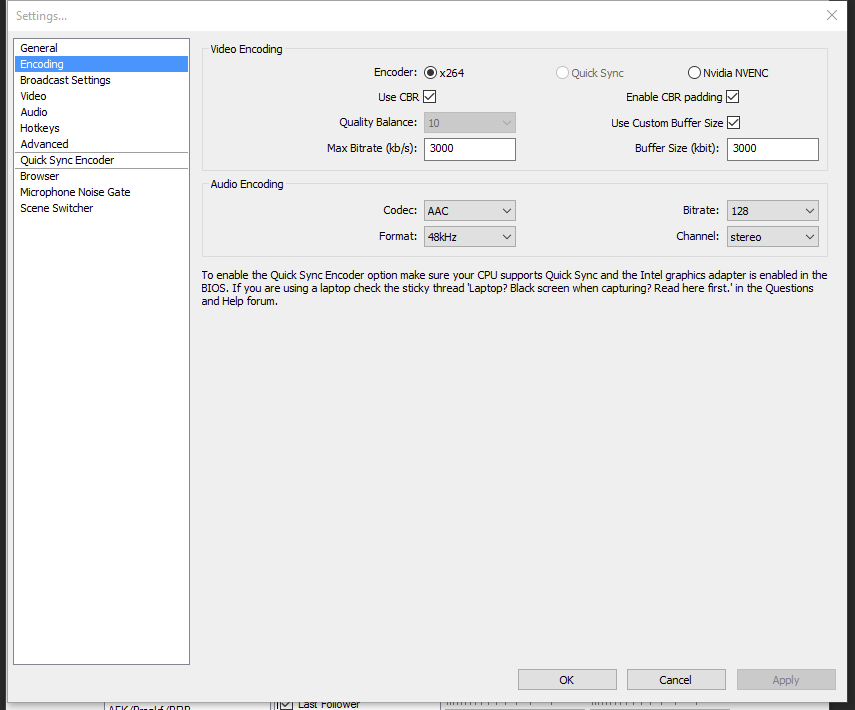 Here in the Encoding page is where you'll set the upload speed you'll stream with and what encoder you'll be using.

Now IIRC Twitch will let you set your max bitrate to 3500 as that's what they cap it at.

It's always best to use the x264 encoder as Nvidia Nvenc isn't really meant for streaming (was created for recording games, hopefully that'll change soon as it helps with the strain on your CPU) and Quick Sync is something I've never tested before but x264 always gives the best quality IMHO.

The next thing you want to make sure of is to always have the three boxes for CBR, CBR Padding and Custom Buffer Size checked as it will help adjust your quality and other things for the random speed drops you will endure while streaming and they always happen (you can have it set to stream at 3000 kb/s like I do and it could randomly drop to 2900 kb/s or 2700 kb/s during a stream due to random things using up your internet at the time).

Now onto the most important part of this page, the Max bitrate and Buffer size.
These are dependent an your upload speed for your internet. As you can see I have mine set to 3000 for both as my internet upload speed is 5 MB/s which is equivalent to around 5000 kb/s~ (not that equivalent but close enough). You will want to go test your internet speed at www.speedtest.net to see what you can set it at. You always want to set it lower than your upload speed to count for speed drops and what ever else you have using your upload speed. An example I can give is playing Multiplayer games, I play and stream League of Legends sometimes so I leave 2 MB/s to deal with League, Music, and other programs that would need to use my upload speed to work. Using your entire upload speed while streaming can cause buffering issues for viewers and even frame drops for you in OBS.

The Audio Encoding you can leave at it's default settings as they are usually the best you can use and the best for viewers.

Now another thing to point out about the Bitrate is that you should set it at something that you know most of us can watch at. Our channel isn't partnered (maybe one day) so viewers can't choose what quality to watch the stream at (mobile, low, medium, source, etc). The higher you have your bitrate set on the more the viewer/s have to download to see. So say someone has a pretty bad download speed, if you try to stream to them at 1080p with the max bitrate at 3500 that person will either have buffering issues constantly or won't be able to watch at all. 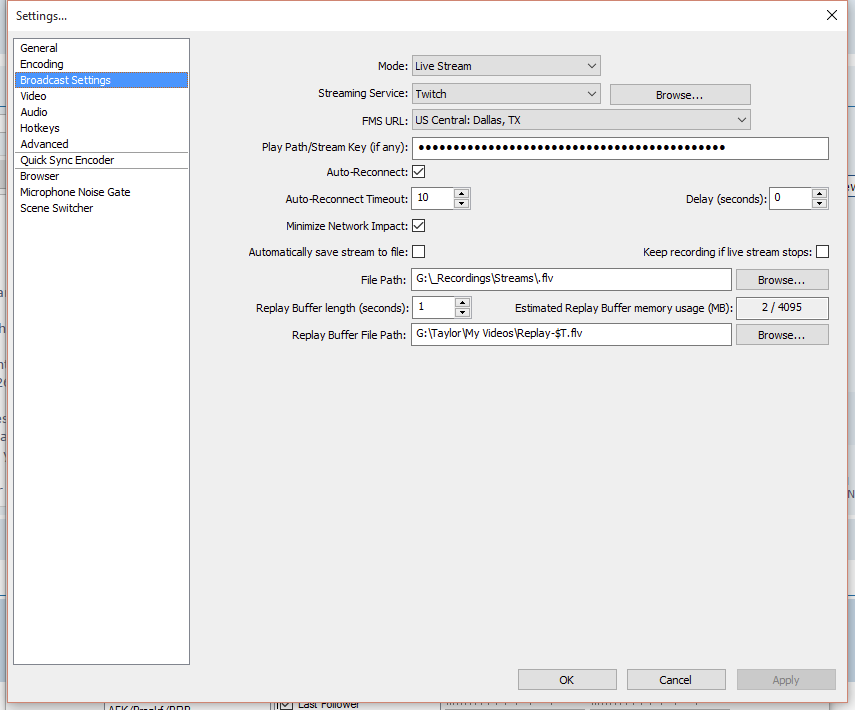 The Broadcast Settings page will be the easiest to setup as you don't have to mess with over half of the settings in here.

All you have to make sure of is that your mode is set to Live Stream, streaming service is set to Twitch and you have your closest server selected and your stream key (which is provided by the staff to you) put in.

Having the Minimize Network Impact box checked could also be helpful to some of you but not others. It's based on your internet usage and speed that you are paying for so check it if you think your network could benefit from it. 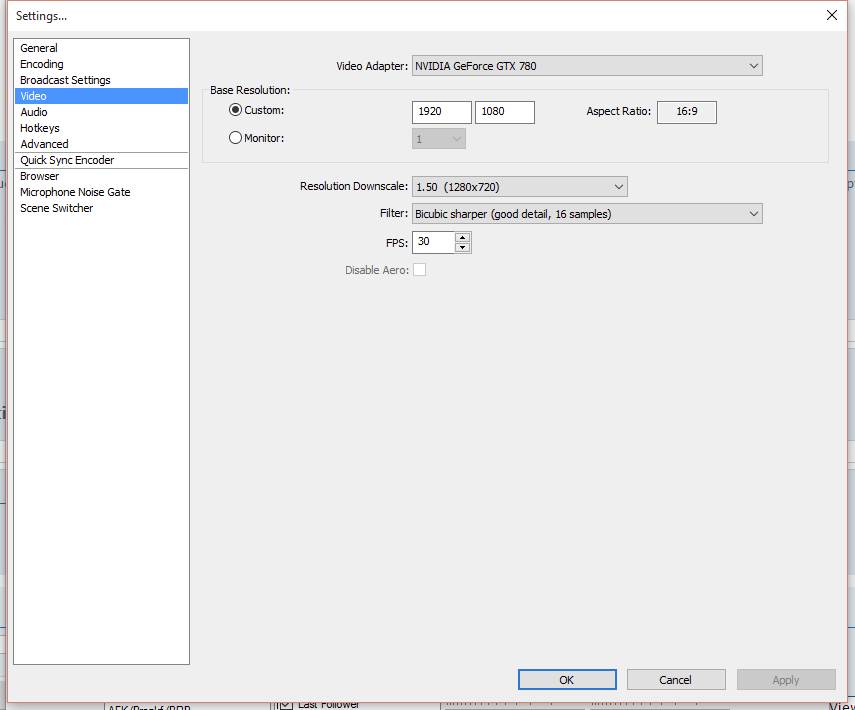 Here in the video settings is where you'll set what size your monitor is for you (mine is 1920x1080 resolution) so set that to what ever you are using.

Now for your Resolution Downscale you will want to set it to something smaller than 1080p. My internet can handle 1080p but my CPU is a piece of garbage and the cooler for it is as well so I can only stream at 720p. 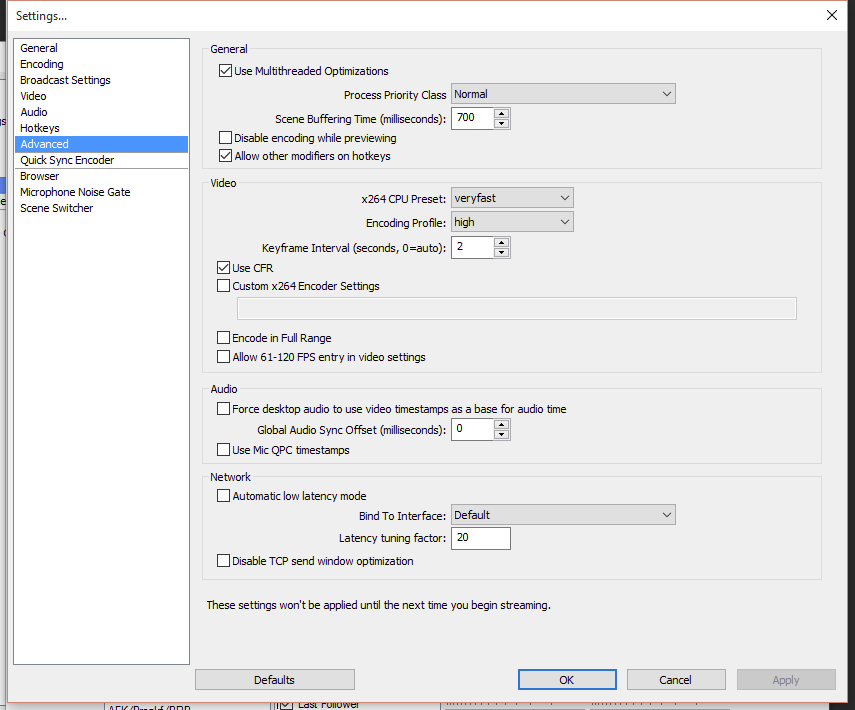 Alright now for the Advanced Options page all you really have to do is just make sure your page matches my page. There is nothing really to explain besides 2 things so I'll get to that now.

For your x264 CPU Preset make sure it's always on veryfast (that is unless you have a beast of a CPU and a beast of a cooler on it). The slower this setting is set to the better quality you will get as the more of your CPU it will use to encode the video. The faster it is the less in quality you get. Most people will need to have this at veryfast.

With all of this you should be able to stream at the maximum quality that your PC and your internet speed will allow.

I would recommend like 800-1200 bitrate and 720p for streaming lr, because its just black and white with the smallest details still being quite large

@Chuggers wrote:I would recommend like 800-1200 bitrate and 720p for streaming lr, because its just black and white with the smallest details still being quite large

quality beyond that is not discernable

Very true unless you have the random streamer use their webcam which then it still really doesn't matter. I prefer to watch a stream with great audio and mediocre webcam quality over great webcam and mediocre audio.
_________________

should also be mentioned that this is windows-only

and I'm pretty sure (?) this is aimed at high-powered computers with good internet. My 2010 MacBook Pro will really only let me stream at a bitrate of like 400 without creating all sorts of problems
_________________
Support My Art
A playlist of my best tracks
To keep up with what I'm up to in the world of Line Rider, follow me:
My Twitter | My Tumblr | My Twitch | My Facebook Page | My Instagram
(You can also follow my patreon and see all public posts completely for free)

should also be mentioned that this is windows-only

and I'm pretty sure (?) this is aimed at high-powered computers with good internet. My 2010 MacBook Pro will really only let me stream at a bitrate of like 400 without creating all sorts of problems

What type of CPU does your macbook have? Streaming itself is an intense strain on any cpu no matter what type of computer from low end to high end. That's why most big streamers now have 2 different PC's entirely. 1 to play the game on and do their day to day things and the other used just to capture the video signal from their gaming pc to their streaming pc via a capture card and to encode and stream what they are doing.

You're computer shouldn't be stopping you from streaming at the highest bitrate you possibly can. What's your upload speed?
_________________